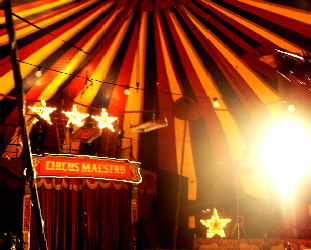 While Lear 1864: Trail Of Tears remains on hiatus before its summer tour, Kaiden is currently in the rehearsal process with Tinted Glass Theatre Productions for a gripping revision of Knee High Theatre Company’s Nights At The Circus, based a novel of the same name by author Angela Carter.

Set at the turn of the twentieth century in 1899, the play sees skeptical journalist Jack Walser (played by Gerry Fitzpatrick) try to expose famous winged Cockney aerialist and freak Fevvers (played by Emma Chloe Reeves) as a fraud. However, Jack soon becomes enchanted by the exuberant  Fevvers falls in love and joins the circus as a clown so that he may follow her exploits further. A feminist work, the piece also examines the deconstruction of self, each of the play’s eccentric, stylised and histrionic characters being broken down and rebuilt amongst the chaotic world of the circus. The piece will fuse naturalistic scenes with others based in physical theatre and dance, teasing the audience with ideas of magical realism.

In this production Kaiden will be portraying two separate characters:

The first is the short, fat ringmaster of the circus Colonel Kearney. Kearney, based on the real life Victorian showman from America P. T. Barnum, is the very definition of entrepreneur, valuing the dollar above all things excepting one: his physic pet pig called Sybil who makes all of Kearney’s business decisions for him! The second character Kaiden is to portray is the piece’s villain, Mr. Sugar. Excessively rich and owner of innumerable amounts of diamonds, Mr. Sugar is a cold and obsessive man who collects wings, longing to sever the wings from Fevvers’ back to add to his collection. Mr. Sugar’s physicality could not be further from Kearney’s. While Kearney is stout, grounded and swaggers across the stage, forever the earthy and enticing showman, Mr. Sugar is calm and collected, a thin, stretched man who glides more than he walks. It is through these opposing physicalities that Kaiden is currently exploring the differences between these characters, also examining any similarities within their psychology, investigating the ideas of obsession, greed and objectification of women for personal gain.

The production will open 8th June this year in The Ustinov Theatre, Bath as part of Bath Spa University’s ‘Hatching Out’ Season, performing up until 12th June. Tickets available here.